To reduce heat generation and establish a longer lifetime, the Ultimate Rectifier distinguishes itself in the following three subjects: “Technology,” “Durability,” and “Temperature.”

The goal was to develop a voltage regulator/rectifier that outlasts the vehicle’s expected lifetime. Therefore, The Ultimate Rectifier uses military-grade components, that are designed and tested to operate in extreme low and high temperatures ranges and can resist higher vibrations. 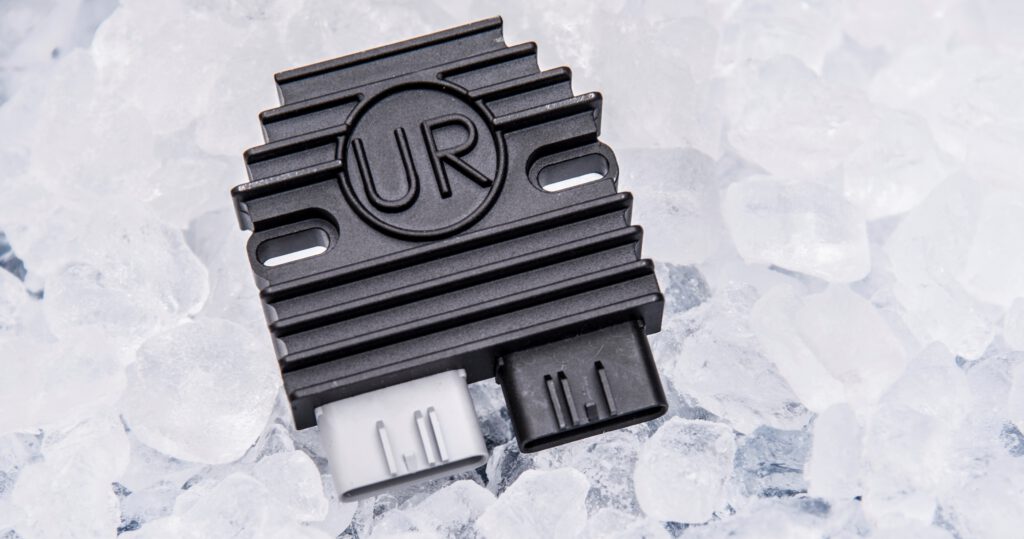 Undervoltage protection:
When there is a high consumption of energy, most voltage regulators/rectifiers deliver a lower charging voltage to the battery—for example, when switching on the full-beam headlight or when the cooling fan kicks in. Because of our intelligent microcontroller-based control strategy, the charge voltage to the battery is kept higher than its competitors. This results in a more stable charging voltage and faster battery charging in high-power demanding situations.

Many hours have been spent in research and development (R&D) to create the Ultimate Rectifier. It started with studying other voltage regulators/rectifiers to determine what technology competitors use. With this information, we started designing the Ultimate Rectifier. First, starting with simulations, and when these were promising, we began with the realization. When realizing the prototype, we ran into practical problems that meant we had to go back to the drawing board. After several prototypes, we found the perfect technology that suits the goal of the Ultimate Rectifier!

The next step was the housing of the Ultimate Rectifier. The housing is responsible for heat dissipation and is therefore essential. We took the electric parameters from the simulations and did multiple finite element analysis (FEA) on the designed housings. After a number of prototypes, we have found the perfect balance between appearance and performance.

Furthermore, we built a test system for the regulator/rectifier, so that we could undertake comparisons between our own prototypes, and also set them out against competitors. With the use of this test system, it is possible to test up to 300% of the nominal electrical power that a motorized vehicle uses. After testing competitors against the Ultimate Rectifier, only the Ultimate Rectifier could withstand the test at 300% of nominal electric power. Competitor regulator/rectifiers abruptly failed when the testbench reached +/-140%.

Making an outstanding product means more than only research, development, and making some prototypes. To make a sturdy product, you need precise production procedures to ensure that every product meets the same predefined standards. To establish this, early on in the design phase, we started thinking about the production process. How to easily manufacture the product, and which tooling is needed to quality each and every product.

It is crucial when producing technical products like our Ultimate Rectifier that each unit is tested individually. Therefore, the voltage regulator/rectifier test system has been modified for automatic testing. This automated test system ensures that every Ultimate Rectifier leaves our production facility to meet our high standards.